Here is Part 2 on the PLA hawkish faction from China Brief, with added links to sources, and a couple of graphs from the utterly awesome Baidu Index (big hat tip to Kaiser Kuo).

I’d also like to add my thanks to Xuan Cheng, John Garnaut, James Barker, Mark Stokes and Taylor Fravel for discussions and tips on this topic. They don’t necessarily agree with the content of the article. 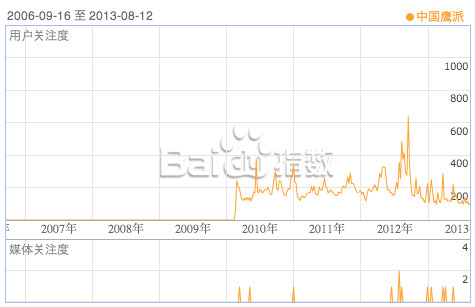 Rise of the hawks: searches for “China hawkish faction” by logged-in Baidu users since 2008. I’m requesting further info from Baidu regarding the extremely low pre-2010 numbers. One point that can be made with confidence is that user interest in the “Chinese hawkish faction” peaked during the Scarborough Shoal and (especially) Diaoyu Islands crises.

If outspoken Chinese military officers are, as Part One suggested, neither irrelevant loudmouths, nor factional warriors, nor yet the voice of the People’s Liberation Army (PLA) on foreign policy, and are instead experts in the PLA-CCP propaganda system, then what might explain the bad publicity they often generate for China? This article explores how the activities of China’s military hawks may contribute to the regime’s domestic and international goals. On a general level, the very appearance of a hawkish faction—the “opera” that Luo Yuan has described—serves the domestic purposes of promoting national unity (Global Times, May 4). By amplifying threat awareness and countering perceived Western plots to permeate the psyche of the Chinese populace and army, the “hawks” direct public dissatisfaction with the policy status quo away from the system as a whole.

In specific crises, such as the standoff at Scarborough Shoal last year or in the wake of the Diaoyu Islands purchase, hard-line remarks from uniformed commentators serve to rally domestic public opinion behind the prospect of military action, instil confidence in the PLA’s willingness to fight over the issue and deter China’s adversary. By amplifying the possibility of otherwise irrational Chinese military action and inevitable escalation should Beijing’s actions be interfered with, they have contributed to a thus-far successful effort to convince the Philippines and Japan to accept the new status quo around Scarborough Shoal and the Diaoyu Islands.

END_OF_DOCUMENT_TOKEN_TO_BE_REPLACED

In my first foray into mainland China’s propaganda system since winning a “second-class prize” in a television language competition heavily rigged in my favour, the previous post (written for the Jamestown Foundation’s China Brief) was picked up by mainland online media on Tuesday, and run under headlines including:

I apologize in advance for the infelicitousness of this post, but i am a student and this is a blog, so can’t take these things too seriously 😉

My personal favourite headline was:

Since i now speak for “America” (or is it that i am America?), it is high time i actually went there.

END_OF_DOCUMENT_TOKEN_TO_BE_REPLACED

Propaganda, Not Policy: Explaining the PLA’s “Hawkish Faction” (Part One)

Propaganda, Not Policy: Explaining the PLA’s “Hawkish Faction” (Part One)

The regular appearance in the Chinese media of People’s Liberation Army (PLA) figures calling for aggressive foreign policy causes controversy and confusion among foreign observers. The most sensational remarks usually are made by academics at PLA institutions. Foreign media routinely pick up sensational quotes from these military officers—such as Major General Luo Yuan’s repeated suggestion for declaring the Diaoyu Islands a Chinese military target range or Rear Admiral Zhang Zhaozhong’s recent call for a blockade of Philippine outposts in the Spratly Islands (Beijing TV/Huanqiu Wang, May 27)—and attribute them to senior military leaders, as their ranks seem to suggest (New York Times, August 20, 2012; TIME, Februrary 20; Tea Leaf Nation, February 25; South China Morning Post, March 6; Reuters, March 17). Operational commanders, however, seldom comment in public on policy issues. Prominent foreign policy analyst Wang Jisi has publicly complained about “reckless statements, made with no official authorization” which had “created a great deal of confusion” (Asian Wall Street Journal, July 1, 2012). In April, recently-retired deputy military region commander Wang Hongguang wrote military pundits had “misled the audience” and caused “interference with our high-level policy decision-making and deployments” (Global Times, April 20). This two-part series assesses who these outspoken PLA officers represent and the implications of their hawkish statements through an evaluation of their backgrounds, affiliations and statements on their work.

Debate about belligerent public remarks from military personnel often surrounds the extent to which they might represent the voice of hawkish PLA constituencies, pressuring the leadership to adopt more aggressive policies. Some analysts tend to dismiss such bluster as largely irrelevant on the basis that military media pundits have no operational military authority, despite their high rank. Others, however, emphasize how continued outspokenness by military figures presupposes high-level party or military support, and that they thus give voice to behind-the-scenes political struggles. A third view proposes that the hawks are the voice of the PLA as an institution, pushing the military’s policy preferences [1]. Analysis of scattered biographical information on the most prominent hawkish PLA media commentators, plus comments regarding their own work, suggests each perspective is partially right. None is a general in a conventional military sense, yet they are far from irrelevant. Their backgrounds, affiliations and positions, however, indicate their role probably has more to do with the regime’s domestic and international propaganda work objectives than political debates.

END_OF_DOCUMENT_TOKEN_TO_BE_REPLACED

Here is an actual weblog post — a log of what one reads on the internet — rather than the usual rambling speculative essay.

The report has been given lots of coverage in the Chinese-language media. Chinese radio bulletins yesterday were reporting on the report before it was even released.

The radio also mentioned that this year’s reports will be issued in English. I hope this is true, because it looks to be packed with highlights:

The reports pointed out that neither the US nor Japan had enough transparency regarding their military budgets.

The report concluded that Japan has strengthened its defense in its southwest islands and was preparing to take over the Diaoyu Islands by force in the future and intervening in any potential conflict in the Taiwan Straits.

Luo Yuan himself was quoted:

“We need to prepare for the worst [situation],” Luo said, adding that China should be well equipped.

This is the second year the think tank has released these reports. Copies of last year’s report carried the term “public version 民间版” on the cover, as pictured at the top, which seems to suggest there also exists some kind of restricted-circulation government version. If so, the China Strategy Culture Promotion Association looks like a good analogue of Luo Yuan’s own roles, at the intersection of military intelligence gathering, public diplomacy, propaganda work, and Taiwan affairs.

Note the watermark on the above pictures, which are taken from the think tank’s own website here. Chinataiwan.org is a website of the PRC State Council Taiwan Affairs Office, which Luo Yuan’s father Luo Qingchang directed in the 1970s and early 1980s.

1.) According to China Intellectual Property News, Dai Xu sued a Hong Kong magazine Wide Angle Lens《广角镜》 and others including a Beijing airport newsagent, for lifting 52% of the 2011 Long Tao article calling for a South China Sea war. He demanded withdrawal of the magazine from circulation, apologies, compensation of ¥200,000. Judgement was handed down in January this year. He was awarded……wait for it…….¥240.

Among other things, i guess this shows Colonel Dai is not that well-connected.

2.) A sharp-witted blogger has outed Dai Xu for writing a preface, under his penname “Long Tao”, to his own chapters, in a book edited by him. Of one Dai Xu chapter, “Long Tao” asserts that “this piece can be called the modern-day Strategies of the Warring States 《战国策》” and that “Dai Xu has continued his consistent style of speaking the truth . . . on national strategy, Dai Xu’s viewpoint is deafeningly clear, and manifestly superior”. In the other self-preface, Long Tao says the following article “will receive the support of the majority of Chinese people and Chinese military personnel . . . an incomparably correct position . . . nobody has ever explained important theoretical problems so clearly, correctly, reasonably and vividly”.

Here we see essentially the same self-wumao tactic as Luo Yuan got caught employing on weibo a few months back. A post appeared on Luo’s weibo account, praising Luo Yuan’s superb analysis of the North Korean problem, and declaring him “the most popular military commentator on television”.

The Major General claimed he claimed his account had been hacked, but Kai-fu Lee certainly wasn’t buying it. He did, however, offer Luo some expert advice: “Although you can use different browsers to operate multiple weibo accounts, the premise is that each browser must be logged into a different account!”

[I spent hours on this post, then WordPress kindly lost it without a trace, hence this is a bit out-of-date, sorry]

The article is brief — indeed so brief that the obligatory preface declaring support for the pundits’ patriotic mission does not even run to a full sentence:

In recent years, military affairs experts have frequently appeared on TV and in all kinds of publications, with the positive effect of strengthening the masses’ national defense awareness and arousing patriotism, but it cannot be denied that some have said off-key things, things that have misled the audience and been irresponsible.

Lt-Gen Wang, who now serves as Vice President of the PLA’s Academy of Military Science, made it quite clear that by “military affairs experts” he was referring to fellow PLA academics, particularly Zhang Zhaozhong, Luo Yuan, and of course Dai Xu.

It’s unusual to hear a PLA academic criticize his comrades in public; even more so for someone of such high rank. But most remarkable was Lt-Gen Wang’s claim that PLA academics’ war talk is “interfering” with the CCP-PLA leadership’s decision-making, citing the specific example of Sino-Japanese relations:

Some experts have inappropriately made comparisons of China and Japan’s military strength, claiming “China and Japan will inevitably go to war”, and that this “would not significantly affect our period of strategic opportunity”, [thus] inciting public sentiment and causing some interference with our high-level policy decision-making and deployments.

Wang Hongguang is in a position to know. Until recently he was Deputy Commander of the PLA’s Nanjing Military Region.