← “Comfortable with their mistresses, the leaders haven’t gotten out of bed”: perplexing Chinese media coverage of the Scarborough standoff
“We don’t need surveillance vessels, we need the navy”: the Standoff at Scarborough Shoal →

Readers (if there are any) may be wondering exactly what and where the mysterious Scarborough Shoal, where law enforcement ships from China and the Philippines remain engaged in a standoff, actually is. Here’s an annotated gallery of photos from Sohu, giving the Chinese perspective. It’s called “The dispute between China and the Philippines over Zhongsha Huangyan Island”.

Note: The Chinese term for Scarborough Shoal (or Scarborough Reef) is 黄岩岛, meaning Huangyan Island. As you will see, it’s really not an island at all, but i’m making the translation on its own terms.

1. Huangyan Island (Scarborough Shoal) is the only one of the Zhongsha group of islands (Zhongsha Qundao) that protrudes above the waterline. It is surrounded by a ring-shaped reef with water depth between 0.5 and 3 metres. The atoll is the shape of a right triangle, and encloses lagoon of 130 square kilometres with water depth of 10 to 20 metres. In the southeastern corner there is a 400-metre-wide channel that links the lagoon with the outside ocean, through which medium-sized fishing boats and small naval vessels can enter. It is an extremely good fishing area and a shelter during storms. 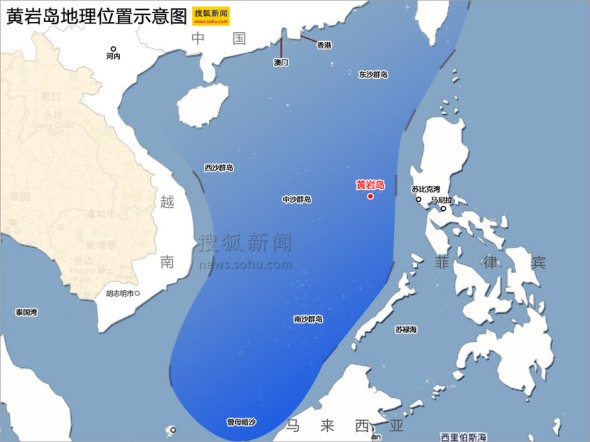 2. In terms of geographical position Huangyan Island is about 800 kilometres from Hong Kong, and about 350 kilometres from the Philippine capital Manila. Like the Spratly Islands, the area around Huangyan is an important shipping lane, at the throat of the main thoroughfare into and out of Subic Bay (Philippines). In addition, the area is super-rich in marine resources, producing plenty of economically valuable species of fish.

3. Scattered pieces of reef appear above the waterline around the Huangyan Island atoll, each piece with a surface area of approximately 1 to 5 square metres. 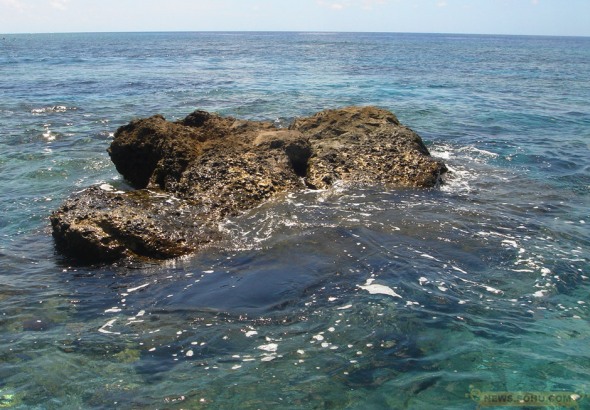 4. This is the biggest of Huangyan Island’s rocks, R2. According to the relevant rules of the International Convention on the Law of the Sea, islands are naturally formed land areas that are above the waterline at high tide. Confirmed islands can be used to draw baselines for territorial waters, exclusive economic zones and continental shelf areas.

6. The satellite remote testing sensor on Huangyan Island, which was later destroyed by the Philippines. Before the 1990s the international community had never raised any doubts about China’s sovereignty over Huangyan, and there existed no dispute over its sovereignty. The Philippines’ 1935 Constitution and 1961 Baselines Law set the 118th meridian as the country’s western boundary, and Huangyan Island lies outside this. From 1993 on, the Philippines commenced explorations, investigations and patrols at Huangyan.

7. A Philippines government official map from the 1990s, with Huangyan outside the Philippines’ territory. 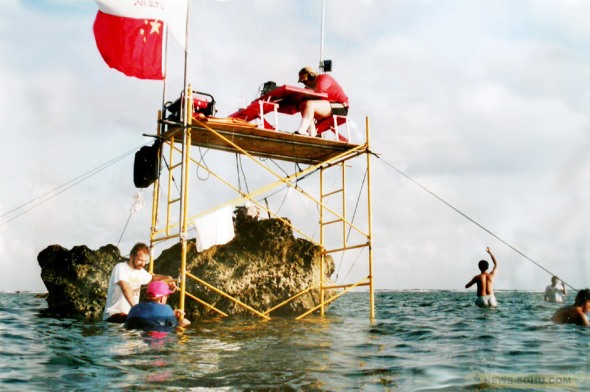 8. In 1994 the call of channel “BS7H” was sent around the world for the first time from beside Huangyan’s second largest rock. “BS7H” represented the internationally-recognised Huangyan Island amateur wireless radio signal, with B representing China’s wireless radio, S standing for the islands of the South China Sea, 7 representing the administrative region of Hainan Province in our country’s 7th region, and H for Huangyan Island. The China Radio Sports Association (中国无线电运动协会) teamed up in June 1994 with wireless enthusiasts from America, Japan and other countries to organise the first “Huangyan Island Long Expedition”. On June 25, the Chen Ping-led expedition of 8 people landed on Huangyan. The team then constructed a platform on a 1.5-metre-high piece of reef, and on that day at 6.18pm the “BS7H” Huangyan amateur radio station contacted the China Radio Sports Association station in Beijing for the first time.

9. In 1995, the team operated on R3, using an aerial tied to China’s memorial tablet. Because of some technical problems, the American Amateur Wireless Association had not awarded points towards its DXCC certification for the 1994 operation. The reason was that it did not count as a land-based operation because it had taken place on a platform in the water. So in April 1995, Chen Ping once again led a team to Huangyan, and this time they took care to operate from one of Huangyan Island’s protruding rocks.

10. The 1995 BS7H station on Huangyan’s second-largest rock. On January 23, 1996, the American Amateur Radio Association committee passed a motion to list “BS7H” as an independent remote DXCC entity more than 225 nautical miles from the mainland. All amateur radio stations to make contact with BS7H would obtain an extra point in the scoring system.

11. BS7H’s 1995 contact card, with the whole team on Huangyan’s biggest rock. DXCC is a game designed in America in 1935 to promote amateur radio activities. Under the rules of the game, the world is divided into numerous DXCC entities, each of which are assigned International Telecoms Union wireless calling code prefixes to mark them according to the country they are located. Each country can become a DXCC entity, as can islands more than 225 nautical miles from any other territory of that country. The listing of BS7H as one of the 3 million amateur stations of the famous DXCC system brought the fact of Huangyan belonging to China to many people’s ears.

12. The tablet placed by China’s Surveying Bureau, Earthquake Bureau and Oceanic Administration in 1980 (taken in 1995 – by 1997 it no longer existed).

13. Team members operating the BS7H station on Huangyan’s second-largest rock in 1997. Before that year, the Philippines had not made any territorial claim to Huangyan, but in May 1997, after travelling aboard a China Maritime Surveillance ship to reach Huangyan for the third time, the Chinese radio enthusiasts were searched and harassed by the Philippines’ military surveillance aircraft and naval gunboats.

[To read more about this incident, check out this 1997 piece from the Far Eastern Economic Review. According to the article, the expedition team was actually told by the Chinese government to cut their trip short.]

14. Despite the Philippines’ harassment, the expedition still successfully completed its task. On this trip the BS7H station contacted 14,000 stations around the world. 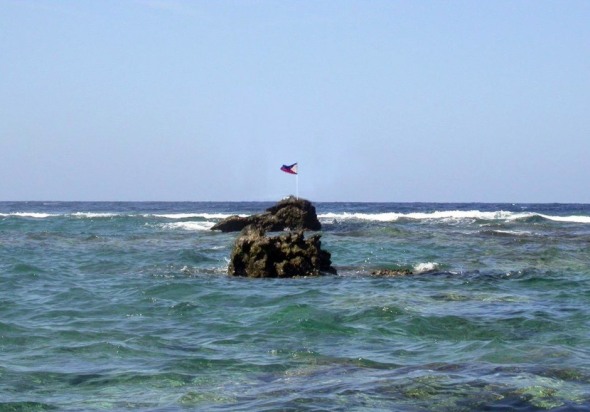 15. In May 1997 Filipino fishermen raised the Philippines flag on Huangyan, and destroyed China’s sovereignty marker.

16. On May 17, 1997, not long after the Chinese radio enthusiasts’ third expedition, a Philippines MP and House Defense Chair led military and media personnel to land on Huangyan.

18. On May 20, 1997, a Philippine patrol ship detained 21 Chinese fisherpersons near Huangyan.

19. The fishing boat captain and mechanic were then taken to Subic City in the Philippines and locked in jail.

20. Other sailors were detained in Subic Bay. At the end of May, President Ramos stated openly: “Philippines has the sovereign right to explore and exploit Huangyan’s resources, it is within our Exclusive Economic Zone.” With this, the Philippines had made a formal claim to sovereignty over Huangyan Island.

21. On May 23, 1999 and in July of that year, our country’s fishermen from Tanmen town 潭门镇 in Qionghai, Hainan, separately took two boats, the Qiong-03091 and Qiong-03061 to conduct normal fishing activities in the waters of Huangyan Island. They were chased, rammed and barbarically sunk by a Philippines naval vessel, and afterwards detained for more than one month. Our embassy made timely and serious negotiations, demanding their unconditional release as well as compensation, but the Philippines maintained the sinking was accidental and refused to pay. 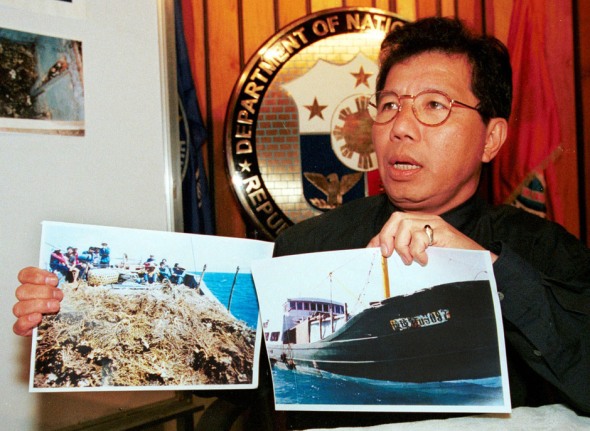 23. Nanjing’s Chen Fang and Chen Xinyu working on the islet’s rocks in April 2007. After 1997 Chinese fishing boats were continuously chased away by the Philippines Navy, and there were even reports of some being arrested. The Philippines has had an overbearing and arrogant attitude on the issue of the Huangyan dispute.

24. Beijing’s Wang Dongping doing monitoring on Huangyan Island in 2007 (he was later the helicopter pilot). In the circumstances, the China Radio Sports Association decided to return to Huangyan for a fourth time. This time their activities were sanctioned by the China Wireless Radio Authority, the Law Department of the Ministry of Foreign Affairs and other relevant work units. On April 25 of that year the team, made up of members from six different countries, rented a fishing boat and set out from Hong Kong. They arrived more than 70 hours later.

25. Tainan’s Ke Zhida and Jiangsu’s Chen Fang constructing the operations platform at Huangyan. From April 29 to May 6, 2007, the expedition team operated the China Huangyan BS7H channel, making more than 40,000 communications with more than 300 amateur radios around the world.

26. The expedition team photographed on Huangyan’s biggest outcrop. Although the Philippines was now claiming Huangyan, so conditions were not as favourable as before, China’s radio enthusiasts still spared no effort to transmit the BS7H signal from Huangyan to the West. 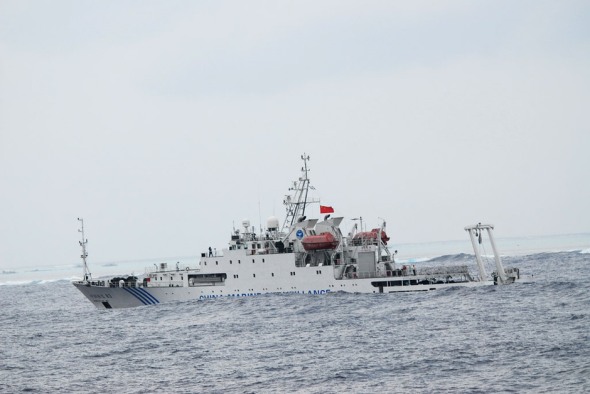 28. Waves on the outer atoll. Photo by Huang Shengyou. 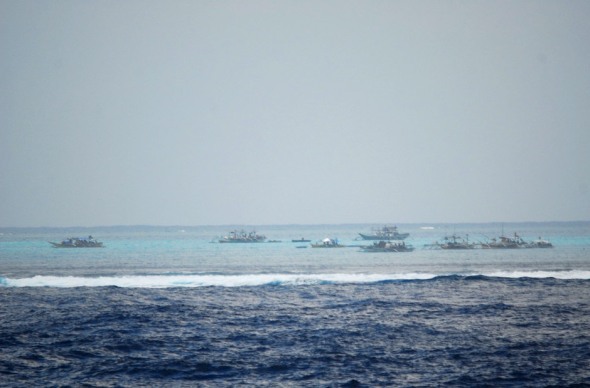 29. Many Filipino fishing boats working in waters near Huangyan. There are about 40-50 large boats, nearly 100 small ones, as well as one-man dinghies, all catching fish. Photo by Huang Shengyou.

30. Most Filipino fishermen maintain close contacts with the Philippines Navy. Some even carry weapons. Photo by Huang Shengyou. 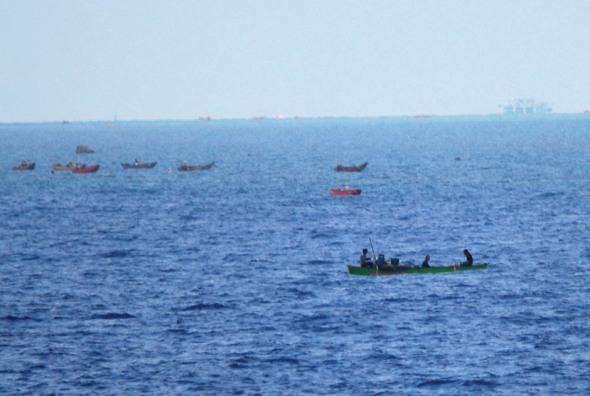 31. In the past, Chinese fishermen also came here to catch fish, but now they are chased away by the Philippines military or even detained. Photo by Huang Shengyou.

33. On June 16, 2011, some Filipinos displayed their dissatisfaction over the dispute with China regarding the Spratly Islands. 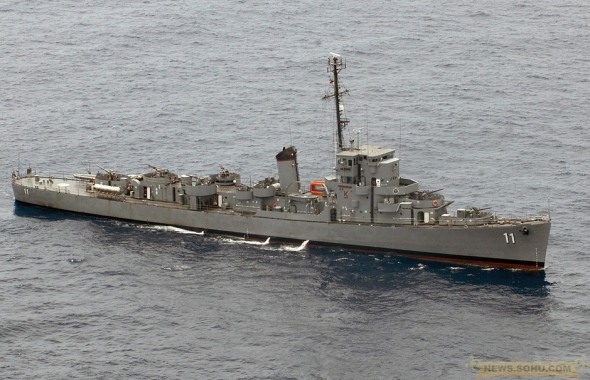 34. On June 17, 2011, Philippines Department of Defense spokesperson Eduardo Batac said the country would deploy its naval flagship the Raja Humabon corvette to “Scarborough Reef” (Huangyan Island) on patrol, in order to display its so-called sovereignty. Besides this, the Philippines conducted joint maritime exercises with the US between June 28 and July 8.

Philippines President Benigno Aquino: The Philippines will protect its sovereignty in the South China Sea. Although the Philippines is a small country, it will not back down for China.

US Secretary of State Hillary Clinton: I want to stress that we are determined to support the Philippines’ defense. This means finding new methods, supplying appropriate material resources and equipment.

PRC Vice Foreign Minister Cui Tiankai: China has not provoked incidents in the South China Sea. Some countries are playing with fire, and we hope America will not get burned.

The title pinpoints Scarborough Shoal as part of the “Zhongsha”, or “Central Sands”, unlike yesterday’s Global Times piece, which mistakenly names it as part of the “Nansha Islands”, aka the Spratly Islands, the very closest of which is 300-odd kilometres to the south.

On the map of the South China Sea that the PRC has submitted to the UN several times in the past couple of years, the “Zhongsha Archipelago” label appears over the Macclesfield Bank, which is about 200km east of Scarborough. The Macclesfield Bank is completely submerged at all times, with a minimum known depth of 9.2 metres (making it a rather questionable “archipelago”).

Remembering that UNCLOS only allows for territorial waters to be claimed from features above water at high tide, Scarborough Shoal’s bald rocks (an “island” in Chinese) are probably quite crucial to China’s claim of “sovereignty” over the “Zhongsha Islands” and their “adjacent waters” – if it is, as it appears to be, advancing its claims in line with UNCLOS.