“The new Axis of Evil”: China and Russia veto UN resolution on Syria 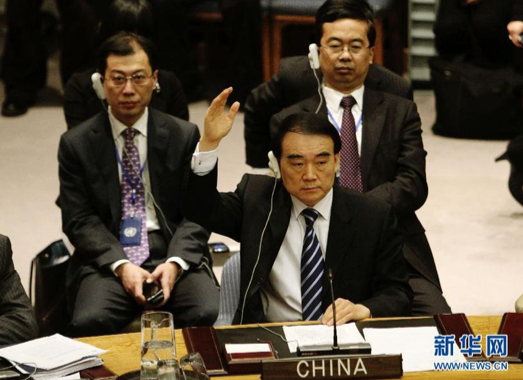 The violence in Syria is currently sitting as a top headline on all the 5 major news portals. All are leading with exactly the same headline: “US and EU seeking Syrian intervention outside UN framework”.

This could be the result of an an order from the SCIO, but of course we don’t know that. There’ also an editorial in the People’s Daily today, explaining how “China’s veto was in accordance with the Syrian people’s basic interests”, so at the very least it’s safe to assume that the central government is paying plenty of attention to guiding public opinion on the Syrian issue.

It came as a bit of a surprise, then, to find comment threads like this one, on the NetEase story, ‘US: China, Russia will be responsibility for bloodshed after Syrian resolution veto’. The most popular comments were as follows:

Aye, some people are afraid that the ‘crafty masses’ (diaomin) will have an example to look at… [2500 recommends]

The ‘China’ in the sentence ‘Rice indicated that Russia and China will be responsible for the bloodshed ahead’ has no relation with the Chinese people, it’s nothing more a crowd of of mainland mongrels (zazhong)! Regarding the ‘Russia’, that may be just one section of Russia’s high-level political hoodlums, like Putin  – the little czar. [2412]

Everyone can see why this country [China] is not popular in the world, why you have the world beseiging you. [2211]

At least, that was the NetEase comment thread on that story. All of the top responses as of 4 hours ago have now been deleted. The thread, with 62,000 participants, now runs:

We are also angry about this but there’s nothing we can do. The Syrian people can only rely on themselves to get rid of this tyrant. Respect to all countries and people who support the Syrian people’s movement for justice. [5362 recommends]

Iraq, Afghanistan, it’s been 10 years already, should America take responsibility? Does Libya now need 10 years and then it can intervene in America? Why can’t America tell north from south? [4129]

Responsibility for incidents should start with those countries (people) who provoke trouble. On what basis are China and Russia responsible? This is entirely a case of the West looking for an excuse for their next evil deed. [2850]

Can this kind of inhuman government be popular (shou huanying)? [2354]

This offers an interesting snapshot of some of the limits of censorship. It suggests that sympathy with the Syrian people is okay, but making the point that these kinds of UN Security Council votes adversely affects China’s international image is perhaps not so. Of course, it’s no surprise to find that labelling China’s leaders ‘mainland mongrels’ (zazhong, lit. mongrel) is not acceptable, nor the original top comment suggesting the Arab Spring could spread to China. The “inhuman government” and “public enemy” comments presumably escaped censorship because it’s unclear who or what it’s referring to – Assad? The US? China and Russia?

The fact the discussion was not shut down, only trimmed around the edges like this, seems to suggest this was more likely an example of NetEase’s own self-censorship than a particular order from the party authorities (which would be more likely to simply specify that certain topics should not be discussed at all).

Interestingly, comments critical of the Chinese government’s actions in relation to Syria are plentiful on NetEase and Phoenix, but they are much rarer on Sina. In fact, this Sina thread, a composite of comments from various Syria-related stories, reads quite like the threads on Kim Jong-il’s death, with the Chinese online population apparently speaking almost with one voice in favour of the government’s heroic veto.

I wasn’t aware of NetEase being a particular hangout of the meigou (‘American running dogs’ – the insult hurled at pro-Americans and liberals more generally) though i will start bearing it in mind as a possibility. More likely though, Sina is for whatever reason simply censoring comments on the Syrian issue more stringently than NetEase.

The Syrian uprising is far from a fringe issue in China’s online media. As mentioned above, it’s one of the top stories on all the main news portals. It’s also an issue many people feel strongly about: today, for example, 8 of top 10 most commented-on stories on Phoenix are Syria-related. On NetEase there are 3 Syria-related stories in the top 10, and the same number are in the top 10 for the last week.

However, if we look at the number of clicks for each story, only one makes NetEase’s daily top 10 (‘China, Russia veto security council resolution on Syria’ sits at number 7 with 490,000 views; number 1 is ‘Shenyang bandit shot dead in street battle with police’), and there are none in the weekly top 10.

Which basically means, as a news topic, it doesn’t compare to domestic cops-and-robbers shootouts, but it certainly inspires a relatively high proportion of readers to comment (or agree with someone else’s comment) if they read about it.